We are very excited to announce here the dates of the "Swoard Demo Tour".

This "Tour" includes of course the main event "ExtremeCarving Session (ECS)" (10th edition) and four other smaller meetings (in resorts we have "certified for EC"). "Demo" does not only mean that the participants can test Swoard boards, but also that they can watch demonstrations of extremecarving by the Swoard team (the founders and Swoard instructors).
Free lessons or advices are given to explain the ride technique we have developed from 1995 to 2001. This technique, easily identifiable, is especially adapted to the width and other specificities of the SWOARD Extremecarver Gen4, the snowboard that inspired extremecarving. The words "rotation", "push-pull", "fluidity" and "gesture purity" will be part of your vocabulary. Advices on the settings of bindings and boots are also provided to fully benefit from all the advantages of the SWOARD snowboards.

At least 2-3 Swoard instructors will be present at each event. The Swoard team will be complete with 7 instructors during the main event "ExtremeCarving Session" in Zinal.

The model SWOARD Dual will also be available. Therefore the riders in soft boots are welcome!

Participate in the "Swoard Film Contest", organized for the 10 YEARS anniversary of Swoard and ECS. Use your footage or shoot more during the season, with one or several Extremecarver (or DUAL) in action, for editing a good extremecarving film. The deadline for participation is end of March 2013. But some films could be already screened during the Saturday dinner in Zinal. There are 3 boards to win

Big thanks to all the people who are now also part of the Swoard team:

- the Swoard EC instructors: Arnaud, Alex, Sylvain, Anthony, Julien and more (the list will be completed)
- the staff in organization: Arnaud, Alex, Francesco, François (= Le Fanfoué), Sébastien and Petr
- the staff in backstage: Tali, Hugo, Salomeya, Rafal, Jörg and the Forum moderators
- the numerous volunteers helping us in the stands (they will be listed after the ECS).
Without your help and passion, those events would not be possible. We believe that this is contributing to make alpine snowboarding more visible in Europe and in the world, what is good for the future of our sport. 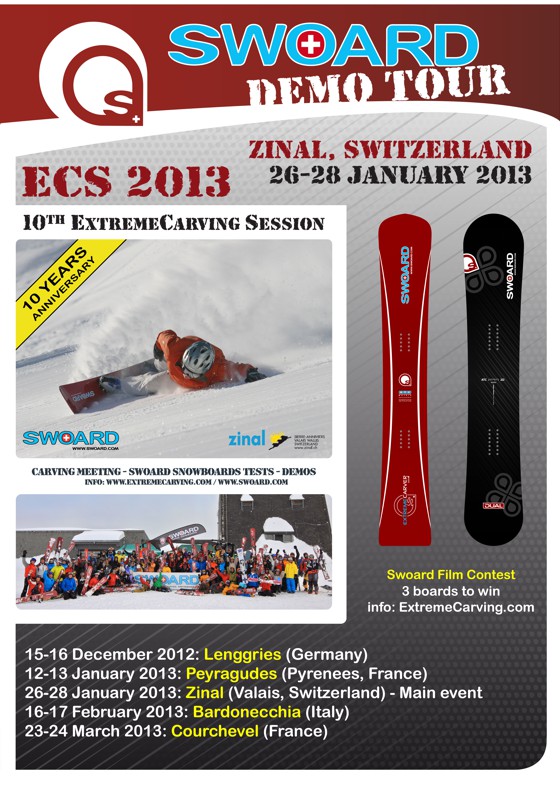