as you say nils, everybody is promoting 'his' products. but if one dealer says something good about a thing, there always are some people wining about him he only want to sellsellsell.... that is what i mean. if i would sell some f2 things or what ever, i would ride it too and tell what i think about. good or bad. as a virus dealer, i always here the same everywhere: ok, you sell this or that, you have to tell it's good. and the stuff is to pricy, not worthy the money spend... i just wanna say, get out and test all you can, to find out yourself what does the job for you. sorry if it sounded angry what i wrote. but some times people don't believe, just because a salesman said...
Top

nice to meet you here.

Maybe you remember the guy who was in Sölden with his little sister last winter, fighting with the Virus Proto (together with Lothar). I think there is no reason to be upset. If someone writes down here that you are a dealer, this of course might be of interest. So if someone says, that things that a Virus-dealer writes down on the Virus-HP might be not completely objective, this is a logical suggestion.

I think it's great, that you don't act in this way. I also did not doubt in your review! As most of the guys in this forum are rather advanced riders, most of them would like to test the boot anyways before buying it. Sending them to your shop www.schmid-velosport.ch might be a first step to come into contact

would be nice if you would visit this forum again in the future. So please see that posting as the thing it was: An Information about the reviewer, that might be of interest. Not as an offence against your person

i remember you and your sister. hope you both are doing good! it's ok! i know it's harder to believe a dealer than a incognito guy, who write he likes this or that. i just wanted to note, not everything a dealer say does he to make some money. thank's for inviting me to the forum for the future. as you saw, i just write when i am sure about what i am writing.
let's see us again on the mountain,
ride on!
Top

Tom are you a salesman too?

jk
Roman, I personnaly think someone selling a virus or any small brand is rather closer to my point of view than someone that is convinced by reps of Rossi or Salomon.... it means you chose what you thought was good, and not what people told you was good

For example we do promote the Tooltonic sharpener here on EC.com, not because the man that invented / sales it is nice, or because we might get rich with it ( we sold maybe 20 last year wow !!) but because after testing ( over 80 boards hand sharped with it last winter ) we found out the tool was really the best !... And on this page we meet other people talking about things they liked too, shall it be another brand snowboard, etc.... as long as it is sincere and there is a debate possible! This is why you are welcome here

And we do need to go ride to Soelden one day

Everyone talks about it and we never been there grrr!

yes, sölden it's nice in the pre-season. we will be there again this weekend. for shure we will meet us some time! i also hope to come to zinal, it's a part on my list this winter. let's hope the slopes in switzerland soon get ready for us.
ride on!
Top

Guys, I've just got back from Sölden. On Saturday we had a great weather, on Sunday it was rather shitty (approx 20 cm snow felt and was not groomed) but Monday was more or less OK again.

I've met Frank, I've finally seen a Swoard, and what's more, I could test it!

the whole discussion is referring to this sentence i wrote:
I meant that maybe the review written in the guestbook of the virus homepage is not without some personal interest because the reviewer is selling the new virus boot in his onlineshop and thus is interested in convincing the people that the boots has a good quality.

It was never my intention to blame you or telling people your are writing reviews which are not true - please believe me. As Tom said i just want to inform people that you are not a private person who was testing the boot. I have made so many bad experiences where people are telling me a product is very good and at the end i found out that this was not true. Again i am not blaming you and i think my words are not unpolite - i am only raising a concern which was in my mind because of my bad experience. I visited Frank 2 weeks ago and i can tell you i already purchased the new Virus boot from Frank and we had some real good discussions - it was a very interesting evening. So you see i believe in the product

So please don´t be mad, hopefully it is now clear what my intention was.

don't worry about. i was just a little obsessed because i wrote as a private person and not as a saler. for me as a private, snowboarding is part of my life. to have some boards in my hand at work and so beeing part of this industrie (a very small part...

) just makes my life easier while working and not boarding. that's all folks! let's see us on the slopes and doing what matters the most, having fun!!!
ride on
Top

I also tested the Virus Boot at schmid velosport. First impressen, the boot is very light and short, compared to my Indy. The buckles are a bit notchy (hakelig) and for fine adjustment not always easy to turn. For my feet the boot is in front foot area too big, the fixation of the heel is very well.

The main problem is that the bootleg is very low and the support on the shinbone is to punctiform and hurt me after a few minutes in the store.

The foreward lean is only controlled by the spring, no shell deformation, better than the Indy, but the flex is harder than my modified Indy with original spring. Well done is the five stepped foreward lean selection.

Unfortunately no boot for me!

How did you modify your Indy?

Instead of the original bent threaded bolt, i took a normal threaded bolt and a little block of aluminium. In this block are a 5mm hole for attachment to the boot and a M8 treaded hole for the M8 bolt. With this construction I can realize a bigger offset between bolt and boot and the jam of the RAB is reduced. In addition I made the brass tube a bit thinner. So foreward flex is better and there is also more freedom in backward flex, where I use a rubber ring to soften the back stop.

It's difficult to describe, I have to take a picture on weekend.

When I see "RAB" system on the Virus UPZ, I was suprise !
It's the same system as Head Stratos Pro but upside-down and without backrest spring adjustement : 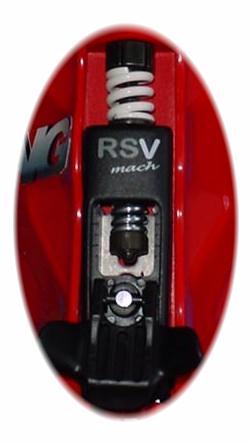 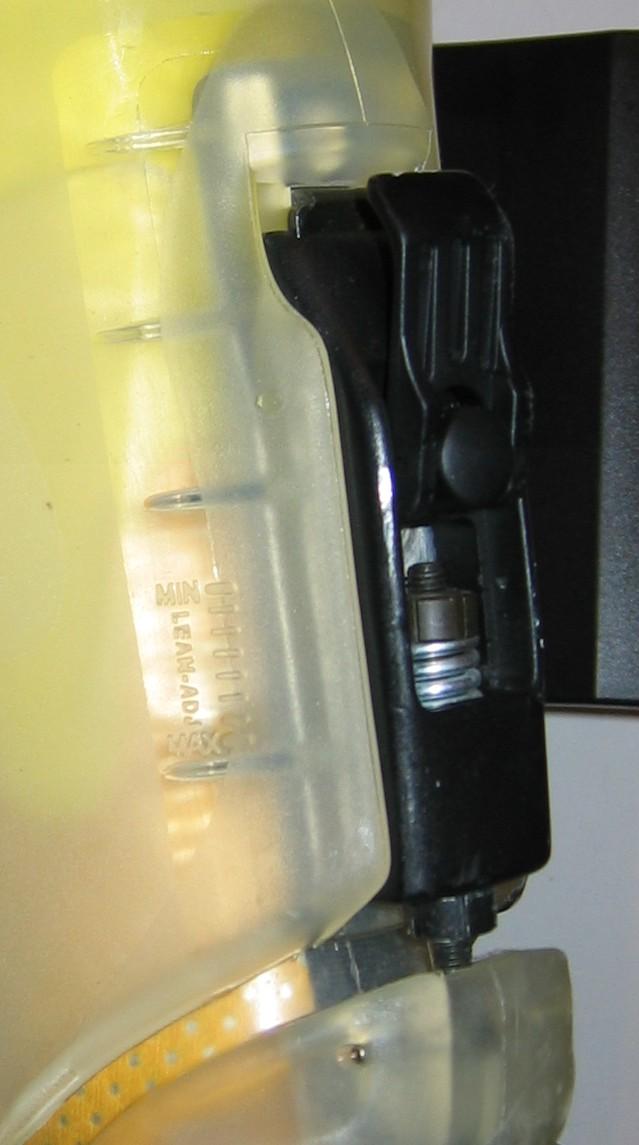 The RAB is not on the Virus boot, I modified it on my Indy.

Here are the pictures to the description above. The dimensions of the alu piece are 24*14*12mm, the offeset between boot fixation bolt and bolt for the spring is 12mm.

Simon wrote:The RAB is not on the Virus boot, I modified it on my Indy.

Here are the pictures to the description above. The dimensions of the alu piece are 24*14*12mm, the offeset between boot fixation bolt and bolt for the spring is 12mm.

Yeah, oke I'm agree with you

I don't know exactly the name of this system....so I write "RAB".

No body have got Virus boots ?